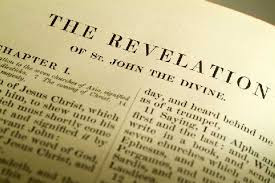 The last writing (or “book”) in our modern Bibles is commonly known as Revelation.  The New American Standard (NAS) translation titles it “The Revelation of John”.

The Concordant Literal New Testament (CLNT) most appropriately titles it “The Unveiling of Jesus Christ”.

The Writ, Dabhar Translation Vol. 2, simply shortens it to “Unveiling”.

When referring to the general aspect of Revelation, popular Christian teaching mentions and focuses on the fact that the Apostle John was given a revelation about events to come, and he wrote it all down as a warning for people about future events.  [The revelation was actually specifically directed to “the seven ecclesias which are in the province of Asia” (Rev. 1:4).]

Because of popular teachings I’ve heard in my past, when I hear the title "Revelation", or consider the Bible “book” of Revelation, I also tie in an idea that it is called that name because the revelation was given to John by a messenger of God.

However, this week, as I very slowly took the time to read Revelation 1:1-3 and ponder the words more slowly, I realized something altogether much more meaningful.

The revelation was given to Christ, by God, first and foremost!

Christ would not have known any of it except that God revealed it to Him.  God pulled back the curtain to one of the scenes of His preordained future plans and revealed that scene to Christ in order for Christ to subsequently reveal it to those belonging to Him.  Accordingly, Christ revealed the scene to a messenger who then revealed it to John.  This messenger referred to himself as a fellow slave of John’s and of the prophets (Rev. 22:9).

The Scriptures repeatedly remind us that all is out of God and through Christ, and once again we are reminded of that in Revelation 1.

"Unveiling of Jesus Christ, which God gave Him
to show to His holy ones what it is binding to become in quickness;
and He signified it, dispatching through His angel
to His slave John, who witnesses the word of God,
and the witnessing of Jesus Christ, as much as he perceived."
(Un 1:1, Dabhar)

This seemingly little detail that God revealed something to Christ first before it could be revealed to man has immense implications. It reiterates three very important facts:

* ALL IS OUT OF God and THROUGH Christ.

* Only GOD, the Almighty YHWH, knows EVERY thing.

* What Christ knows He knows only because God has revealed it to Him.

I never cease to stand amazed at GOD and His All-Mightiness.